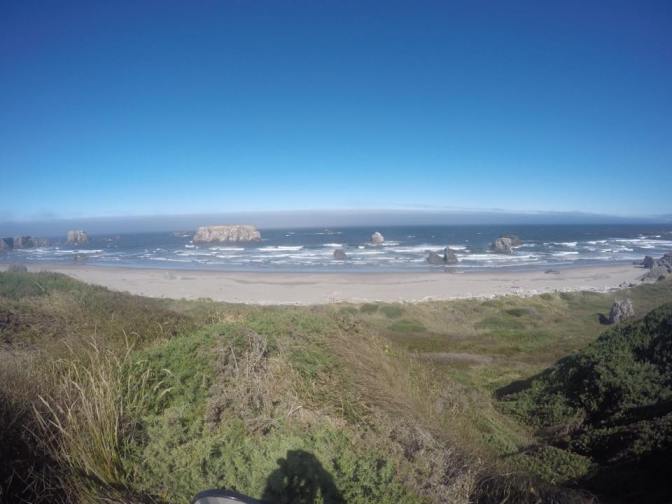 Cyclists who ride country backroads know that when a street sign has the word “Hill” in the name, they’re generally not kidding. So, you can imagine what we encountered this morning when we turned onto Seven Devils Road.

The first of the seven hills rose steeply for half a mile. Over the next 13 miles, punctuated by piercing side winds and high fog that left the forest dripping, six other hills continued the climb. Beginning with hill/devil #3, words began to appear on the road. (Apparently this is a favorite training ride for some local cycling club.)

Sometimes the words offered empathy: “Walking your bike is not cheating.” Sometimes they evidenced a diabolical humor: “No, this isn’t Devil #5, Ha, Ha.” And finally, “Devil #7” with a smiley face, followed in a few yards with, “You’re a devil.”

Payoff came when we turned on Whiskey Run Road, which gave us 4.5 miles of snaking downhill back to the main highway. The rest of the 66-mile day was dominated by long downhills with occasional rollers and a strong tailwind.

Along the way, we saw more of the stunning Oregon coast, especially at Bandon and Port Orford, where five of us stopped in a cafe for lunch and met a young woman from Vancouver, BC, who is riding self-supported to LA. We also met a couple from London who were driving our route—from Seattle to San Diego—and were amazed by the Pacific Northwest. We couldn’t disagree.

Tomorrow is my next to last day riding. This time of moving slowly has gone incredibly quickly. Another in the constant reminders to savor each moment we find ourself breathing.